The New Jersey Humanist Network was founded in 1994 by Harley Brown, and in its early days people from Warren, Sussex and Hunterdon Counties met in each others’ homes. They shared their stories, talked about the politics of the day, the mix of religion and politics, and the stigma of being a nonbeliever. They put ads in the newspapers to reach out to others who might feel like they were the only ones, and they wrote letters to the editor when stories or editorials had a particularly religious slant. They started a mailing list and a newsletter. As more people found the group coming from other parts of the state, they found larger meeting places at public libraries centralized in Somerset County, which is where it’s based today.

At the monthly meetings they’d share their views on the news of the day, discuss issues involving the separation of church and state, and they’d take turns presenting information on topics of interest. They adopted a stretch of Route 31 in Warren County to do a quarterly roadside cleanup, and they hosted a concert of Humanist music performed by amateur musicians and singers. In 2002, members participated in the Godless Americans March on Washington. NJHN was approved by the IRS in 2003 as an official 501(c)(3) nonprofit educational organization. In 2001, NJHN members created the secular holiday known as HumanLight, an opportunity to celebrate and express the positive Humanist ideals and values of reason, compassion, hope, and humanity. HumanLight has been celebrated by groups around the country and internationally.

NJHN hosts programs meetings with speakers and documentaries, participates in fundraising walks and bowl-a-thons, food pantry, school supplies and clothing collections, outdoor hikes, and other social activities. We helped start the Red Bank Humanists group, and for a number of years we sponsored the Humanist Community at Rutgers University, one of only a handful of such organizations on college campuses around the country that provide support for nonreligious students. We’ve hosted or promoted two more concerts of Humanist music, including a commissioned choral work entitled The Light of Reason, and a celebration of the works of famous Humanist composers at Westminster Choir College. We’ve also held several End-of-the-World parties over the years, and we hope to have more of those in the future. We have two big events every year: a summer picnic and a HumanLight party.

Since the Covid-19 pandemic started in early 2020, most of our activities have moved online. In 2021 we held our first online Summer Art Show where our members were invited to showcase their artistic talents. In 2022 we began a monthly online Exploring Humanism course to discuss various aspects of society and how our Humanist values impact our views, and also a monthly online Book Club. We have recently returned in-person to our monthly dinners at the Omega Diner in North Brunswick.

We’ve hosted speakers on topics such as:

And we’ve hosted authors of books on these subjects and many more. We’ve had speakers who espouse that we pay too much attention to life celebrations and holidays with religious origins, and speakers who have urged us to celebrate them more, not less. We’ve had an information table at the Jersey Pride Fest in Asbury Park. We organized a trip on the Freethought Trail in the Finger Lakes region of New York.

We go out to eat and drink a lot. We go to movies, plays, concerts, festivals, museums and other places of interest together. We work with and promote other Humanist organizations in New Jersey, around our region, and nationally. We’re a Chapter of the American Humanist Association, and affiliated with the Council for Secular Humanism, American Atheists, Secular Coalition for America, and GO Humanity (formerly the Foundation Beyond Belief). We’ve provided financial support to the New Jersey Abortion Access Fund, ACLU of New Jersey, Garden State Equality, Coalition Against Sexual Assault, Compassion and Choices of New Jersey, New Jersey Peace Action, Pinelands Preservation Alliance, Delaware Valley Americans United, New Jersey Coalition Against Human Trafficking, Leukemia & Lymphoma Society, Unchained at Last, Franklin Food Bank, Trenton Area Soup Kitchen, and Community Food Bank of NJ. Our members attended the 2012 and 2016 Reason Rallies in Washington, DC. We’ve participated in the Secular Week of Action to fundraise for NJ organizations working with those experiencing homelessness and hunger. We have an active Facebook group, Meetup page and we’re on Twitter. And we have a Merchandise Shop with great NJHN swag! And this only touches the surface of what we’ve done and what we still want to do in the future.

We do our best to keep our members and supporters informed about issues of interest. We are a Humanist Community. We invite you to join us to support Humanist values in New Jersey. 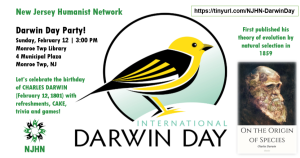